If you are like me, I imagine the lion’s share of your conversations with friends and family focuses on a very small range of topics – work, dating, and dating at work.  While I have thought about writing about my dating life in the past, I was hesitant because my friends and family are at very different of relationship stages.  While these differences normally aren’t a problem, it makes it especially hard to articulate the specific issues I am facing as a single guy in a mobile-first, digitally powered, text-before-you-call dating world.

Gone are the days of landlines, blind dates arranged by friends, and picking up your date and dropping her off.  Now, are the days of digital researching your potential date (guilty), overly long text exchanges fizzling into nothing (guilty) and an endlessly swiping left or right on the latest matching application (guilty).

For instance, many of my single friends can easily appreciate the timing challenges associated with juggling a variety of online matchmaking apps (Coffee Meets Bagel: noon; The League: 5 pm; Tinder: Semi-daily refreshes; Hinge: Hourly updates, etc.)… while, my married friends continue to ask me if I have created joined eHarmony yet.  Suffice to say, very different understandings of the technology-enabled dating scene.

As I pondered this challenge, I realized that I need to approach this the same way HBO managed to cover four wars, two presidencies and a trip to the moon:  a mini-series!  More specifically, an Online Dating Mini-Series by Nick Kroshus.

To start, we need to establish some common language by providing an overview of the online dating application ecosystem and share some basic background and strategies for how one (ie, me) approaches online dating.

For those of you who have been out of the game for a while, let me introduce you to the average single San Franciscan’s collection of dating apps. 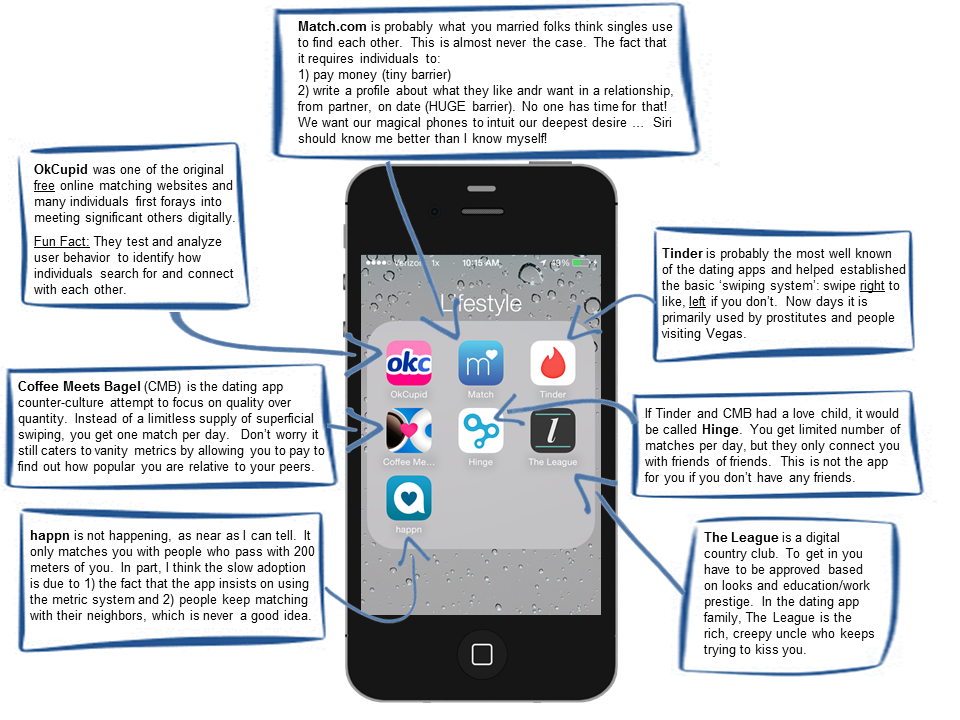 As saturated as the market is, I feel like we are only a few weeks if not months away from some new ways to categorize and partner people… hopefully, by pet ownership (dog lovers unite!).  Given the overwhelming number of options and the near full-time job time commitment, we’re lucky the “Dating as a Service” hasn’t sprung up.  Actually, come to think of it… sadly, “Dating as a Service” does exist and is utilized by some, when you use its more common name, “prostitution”, most buyers & sellers opt out of this market.

Coupling the need to efficiently minimize dating “time sucks” with the desire to maximize the chances of finding a future soul mate, I’ve developed a mathematical dating theorem called the Icarus Geographic Dating Bullseye (or Icarus Bullseye, for short).  The Icarus Bullseye attempts to calculate the relative trade off between “Candidate Age” and  “Candidate Distance”, when altering the online matching preferences.  In short, if you could save yourself 20 minutes of travel, how much does your age preference shift up or down?

The name is based on the Greek legend about Icarus.  Icarus built wings of feathers and wax to flee the Labyrinth in Crete.  Ignoring his father’s instructions to not fly too high or too low, he flew too close to the sun where his wings started to melt.  He tried to correct by flying closer to the sea where the feathers became damp and he fell into the sea.

Similarly, when dating, it is important to find a delicate balance of someone who lives far enough away where you won’t constantly be around each other, yet near enough that you aren’t spending all of your time traveling.

While I would personally never screen someone based solely on age and geography, it tends to be the primary (if not, only) method apps utilize to limit potential candidates.  So don’t judge me for using tools I have… or as the kids say, “Don’t hate the player, hate the game”.

Given dating apps primarily limit your ability to screen potential candidates by 1) age and 2) distance, the bullseye

Using myself as an example, the bullseye highlights the relative change in age ranges as the potential candidate is located further away.  I am much more willing to data wider age range of women who live closer to me, while my standards increase the further I have to go for the dates. 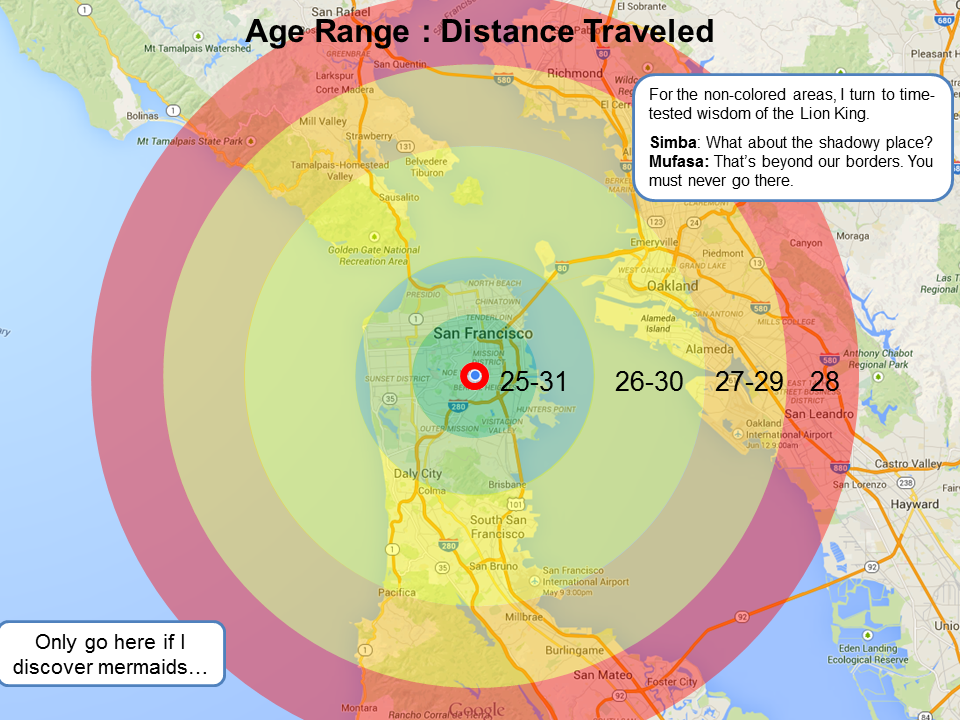 Simultaneously, I don’t want to date anyone too close, cause… what if we break up? I don’t want them to be all up in my business at Whole Foods or the Muni.  Thus, a small buffer needs to be established and maintained. 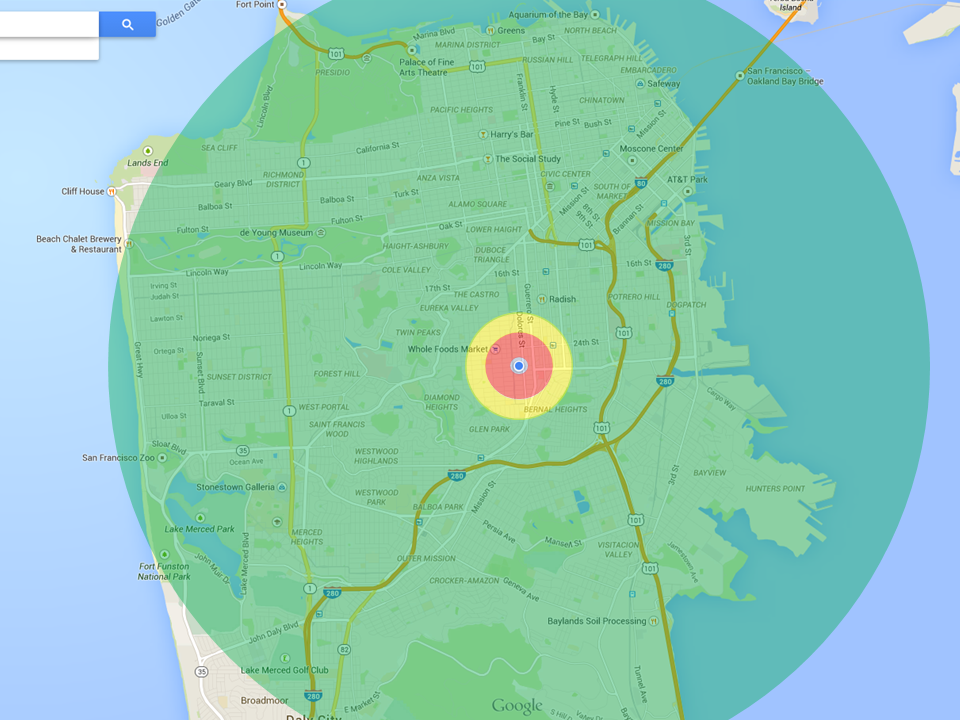 Anyone who regularly uses an online dating application, inevitably develops a system (often bad, but some are good) for quickly evaluating and deciding on the potential matches.  When contrasted with an inexperienced users (eg, married friends), it is almost night and day in how the app is used and matches selected.  When my married friends “play” a dating app, they scrutinize the nuances of each photo, read the user profile, debate if the match is a good person, and what qualities they likely exhibit in relationship.  While the added scrutiny likely leads to higher quality matches, the fact remains that the apps are mostly a numbers game and no one has large amounts of time to commit.

To give you some idea, I tried to articulate some of the considerations I use when evaluating potential matches.  The themes are ranked from least to most important and ultimately, I am hoping the match has a positive score after reviewing their profile. 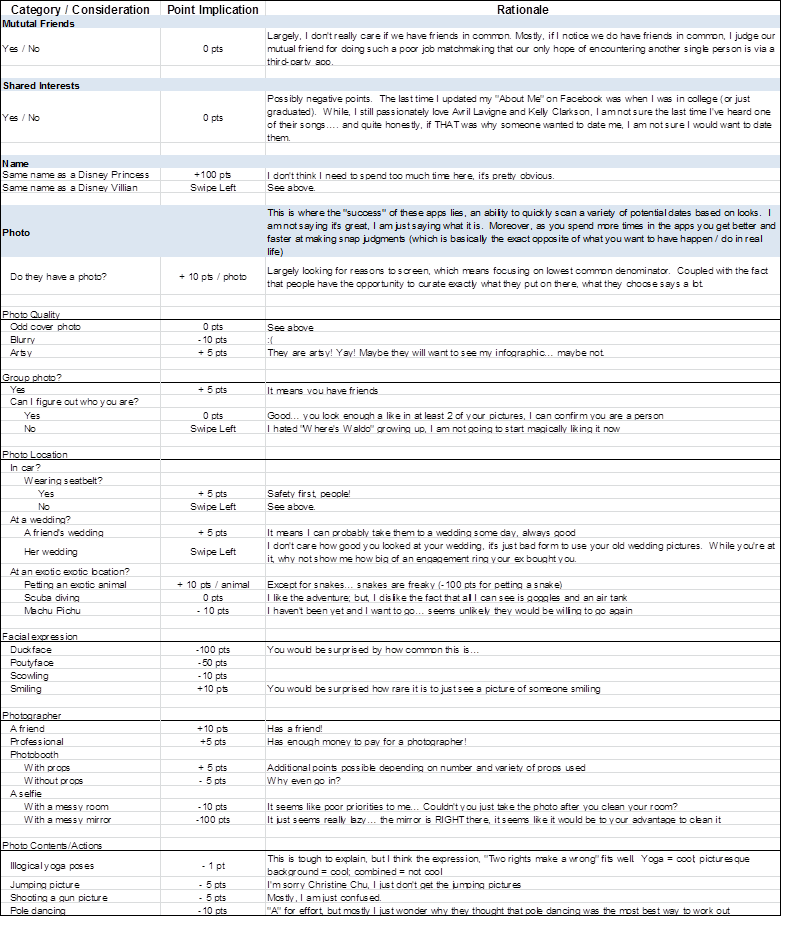 Note: I don’t actually use this spreadsheet… at this point of my dating life cycle, I already have these criteria memorized.

April Resolution: “Be Still for God”

Theme by Anders Noren — Up ↑